The TheraBionic P1 emits low levels of radiofrequency electromagnetic fields and the levels delivered during treatment are lower than those generated by cellular phones when held close to the body. No serious adverse events have ever been reporting with the use of the TheraBionic P1 device, even after more than six years of continuous use. 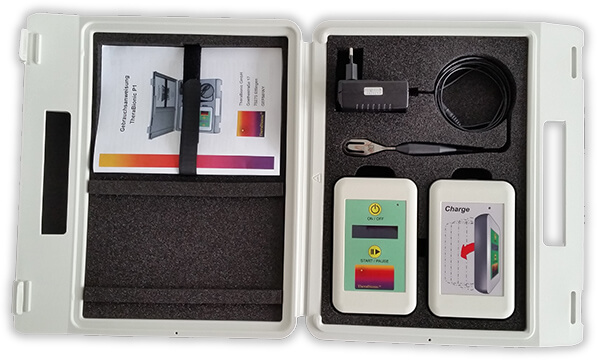 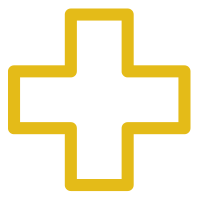 Until recently, only symptomatic treatment was advised for patients who have failed or are intolerant to first line and second line therapies for advanced hepatocellular carcinoma.

In an investigator-initiated, single-group, single-center, non-randomized, phase I/II study in patients with advanced HCC, Costa and collaborators assessed the safety and effectiveness of treatment of advanced hepatocellular carcinoma with HCC-specific modulation frequencies of low energy radiowaves.(Costa, de Oliveira et al. 2011)
Patients with advanced HCC with or without metastases, diagnosed by imaging or biopsy, age 18 years or older with an ECOG performance status of 0 to 2 and with permanently impaired liver function were eligible for enrollment. Previous local or systemic treatments with sorafenib or chemotherapy were allowed. Forty-one patients with advanced HCC and Child Pugh A or B disease and limited therapeutic options received intervention (6 females, 35 males; median age: 64 years; range: 18 – 85; BCLC status B: n=6, BCLC status C: n=35). Thirty-one patients (75.6%) had radiological evidence of disease progression at the time of enrollment as defined by comparison of baseline imaging studies with imaging studies obtained within the previous six months. Thirty-four (82.9%) patients had received therapy prior to enrollment, 25 of them chemoembolization. Seven (17.1%) patients had not received therapy prior to enrollment because of (1) severely impaired liver function in five cases, or (2) refusal to receive chemotherapy for metastatic disease.

Tumor shrinkage as assessed by radiological imaging as well as changes in AFP levels were documented in patients with advanced HCC receiving RF EMF modulated at HCC-specific frequencies administered by the intrabuccal probe. Antitumor activity in patients with advanced HCC was exemplified by partial responses observed in four patients (9.8%) and decreases in AFP levels greater than 20% in four patients. A total of 18 patients (43.9%) either had objective response or SD for greater than 6 months. Importantly, clinical benefit also was observed in patients with Child Pugh B disease, i.e., patients with severely impaired liver function who tolerate poorly antitumor treatment with drugs such as sorafenib (Nexavar®), Lenvatinib (Lenvima®) or regorafenib (Stivarga®).

These results were compared with results by Abou-Alfa et al.(Abou-Alfa, Schwartz et al. 2006): In a large phase II study assessing the effects of Sorafenib in patients with HCC and Child–Pugh A and B who had not received previous systemic treatment, Abou-Alfa et al. observed partial responses using the WHO criteria in 2.2% of patients. This compares to 9.8% with the TheraBionic device, which is an about fourfold higher percentage. Investigator-assessed median time to progression in the Sorafenib study was 4.2 months, and median OS was 9.2 months. Of note, all 137 patients from that study had evidence of disease progression after 14.8 months. At the same time point, four (9.8%) of the patients enrolled in the TheraBionic study did not have evidence of disease progression. These findings suggest that the TheraBionic device may increase the time to radiological progression in advanced HCC. Importantly, the ratio of Child-Pugh A patients vs. Child-Pugh B patients was higher in the Abou-Alpha et al. study(Abou-Alfa, Schwartz et al. 2006) than in the Costa et al. study.(Costa, de Oliveira et al. 2011) Thus, better outcome in the Costa et al. study cannot, therefore, be attributed to better general physical condition.

Mechanism of action of frequencies on HCC 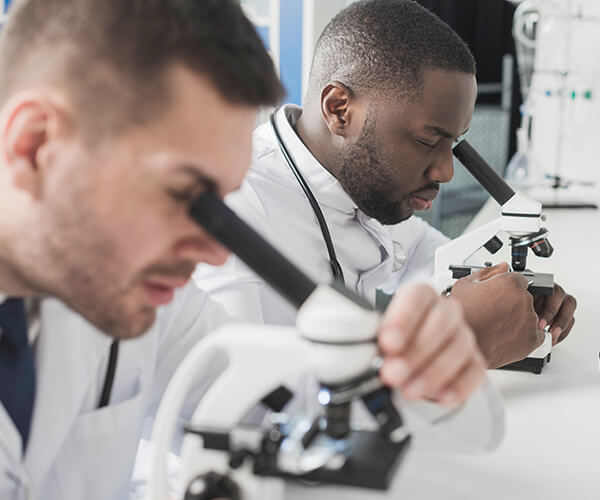 In 2001 Pasche and Barbault began examining patients with a diagnosis of cancer with the goal of identifying cancer specific frequencies. Using noninvasive devices emitting very low and safe levels of radiofrequency electromagnetic fields, commonly named radiowaves, they discovered that patients with a diagnosis of cancer exhibited subtle but reproducible changes in their palpable pulse when exposed to certain frequencies. Next, they hypothesized that the frequencies they had discovered could be used to treat cancer and designed a study in which patients were offered treatment with tumor-specific frequencies. Radiowaves modulated at the tumor-specific frequencies were delivered for three hours daily by means of a battery-operated portable device connected to a spoon-shaped antenna placed on the patient’s tongue, which results into the delivery of radiowaves throughout the body.(Barbault, Costa et al. 2009) 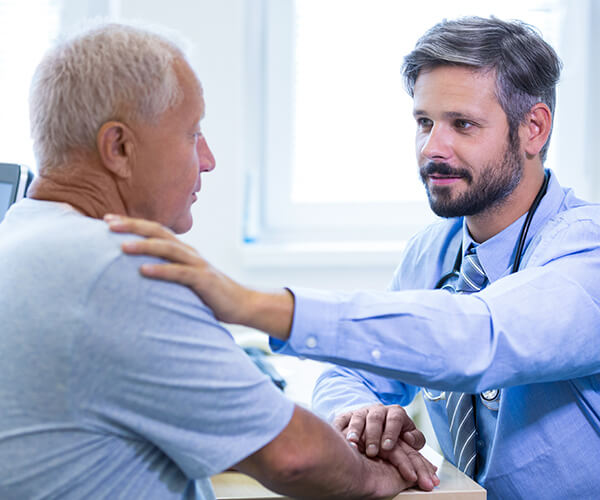 Several patients enrolled in this study, published in 2009, had evidence of either tumor shrinkage or stabilization of the growth of the tumor, confirming the hypothesis that radiowaves modulated at specific tumor frequencies could block cancer growth.(Barbault, Costa et al. 2009) This hypothesis was further confirmed in a subsequent study conducted by Costa and collaborators in patients suffering from advanced hepatocellular carcinoma, which was published in 2011.(Costa, de Oliveira et al. 2011) In that study, treatment with the cancer-specific radiowaves again resulted in either tumor shrinkage or tumor growth arrest in approximately half of the patients treated.(Costa, de Oliveira et al. 2011) 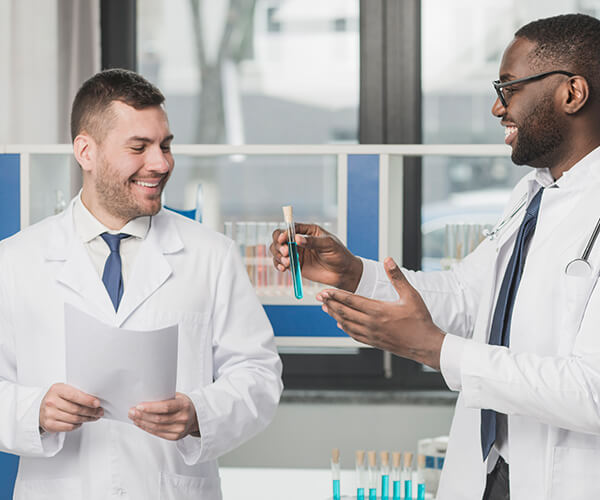 The following report describes a methodologically sound assessment of the therapeutic efficacy of the TheraBionic (TB) device by way of a statistical analysis of several studies. In this report the results of a single arm TheraBionic study are compared with control groups and treatment groups from two other studies. We examine three outcomes:

The data from this analysis derives from three studies on hepatocellular carcinoma that were published in major scientific journals:

The following comparisons were made by way of statistical analyses:

The 95% confidence intervals from these two studies do not overlap – in fact, the difference between the upper bound for the Bruix study and the lower bound for the TheraBionic study is 0.5 months. This provides very robust evidence that the progression free survival (PFS) for patients in the TheraBionic study is statistically superior to the placebo group in the Bruix study.

The 95% confidence intervals from these two studies overlap by 0.6 months, however the upper bound for the placebo group in the Zhu study is 1.7 months less than the median PFS in the TB study (2.7 months vs 4.4 months). Furthermore, the observed median in the TheraBionic study is 2.09 times longer than the observed median in the Zhu study. In the Zhu paper, the authors reported that a 0.7 month (2.1 vs 2.8 month) improvement in PFS resulted in a highly significant difference between groups (p<0.0001, Figure 3A in the paper). Conclusion: the present data comparison strongly supports the determination that the PFS rate in the TB patients is statistically superior to the PFS rate in the placebo group in the Zhu paper.

The above two analyses support the assertion that Progression Free Survival is significantly improved for patients who are treated with the TheraBionic device when compared with placebo (standard of care after sorafenib failure) patients.

The two analyses provide solid statistical evidence that Progression Free Survival is significantly improved for patients who are treated with the TheraBionic device when compared with placebo (standard of care after sorafenib failure) patients.

TheraBionic vs Placebo in Bruix paper

TheraBionic vs Placebo in Zhu paper

These two analyses provide solid statistical evidence that the Overall Survival rate in the placebo patients is between 7.6 and 7.8 months. Since these two studies had nearly identical observed medians and comparable 95% confidence intervals there is evidence that the OS rate in placebo patients is in the observed range of these studies. The TheraBionic OS rate is 2 months higher than the placebo group OS rate (from both studies) and the upper bound for this interval is over 2 years (27.1 months).

For each of the three outcomes presented there is very strong statistical evidence in support of the assertion that the TheraBionic therapy provides statistically significant improvement in clinically meaningful outcomes (Progression Free Survival, Response Rate and Overall Survival) when compared to placebo data from two large contemporary Phase 3 trials with 476 total placebo patients.

Overall Conclusions of the statistical evaluation of the single arm

Since the pivotal patient trial evaluating the TheraBionic device was conducted using a single-arm design there was a question as to the robustness of the clinical efficacy findings if they were compared to appropriate control group populations. The analyses provided above demonstrate that the TheraBionic device shows statistically significant improvement in clinically meaningful outcomes of PFS, OS and Response Rate when compared to two separate control group populations. This evidence should be considered as very strong since these findings are supported by two different Phase 3 control group populations. In addition, the analyses above provide evidence to suggest that the TheraBionic device is not inferior to the Regorafenib therapy and, depending on the outcome, may be better than that therapy. Finally, it is important to recognize that 20/41 (48.9%) of patients in the TheraBionic study received clinical benefit from receiving this therapy (PR+SD) even though the patients enrolled in the TheraBionic study were very high risk (49.8% with Child Pugh Class B at the time of enrolment) and thus had very poor prognosis for response or survival.

In conclusion, data from the contemporary published literature provide compelling evidence to support the efficacy of the TheraBionic therapy in patients with advanced hepatocellular carcinoma.

The TheraBionic P1 device can only be obtained by prescription from a licensed physician.

Treatment with intrabuccally administered amplitude-modulated electromagnetic fields is safe, well tolerated, and shows evidence of clinical benefit, i.e. anti-tumor effects and symptomatic benefit, in patients with advanced hepatocellular carcinoma who have no other therapeutic option available. The majority of patients enrolled in this study had either failed standard treatment options or had severely impaired liver function that limited their ability to tolerate any form of systemic or intrahepatic therapy. Indeed, 16 patients (39.0%) had Child–Pugh B8 or B9 disease. Among these patients, the median progression-free survival was 4.4 months (95% CI 1.6–7.6 months), which is identical to that of the entire group. Five of these 16 patients (31.3%) received therapy for more than 7.5 months, which indicates that this therapy is well tolerated even in patients with severely impaired liver function.

Treatment was well tolerated and there was no NCI grade 2, 3 or 4 toxicities despite long-term treatment. The only treatment-related adverse events were grade 1 mucositis (one patient) and grade 1 somnolence (one patient) over a total of 266.8 treatment months.